The city of Durango, in partnership with La Plata County, is investigating the possibility of forming a library district.

Why is Durango looking to establish a public library district?

The demand for library services continues to grow. There are close to 33,000 library card holders. Prior to the COVID-19 pandemic, the Durango Public Library saw nearly 382,000 patrons personally visit the library. In calendar years 2020/21, electronic use of the library has witnessed nearly double-digit increases. However, despite that increased use, the library's budget is near reliant on sales tax. Sustaining this funding stream has proven challenging and unpredictable, especially during the height of the pandemic. These factors have resulted in reducing library operating hours and services, in addition to continued increases in support from the city's general funds. Creating a library district is considered as a possible option for stabilizing the library’s budget and potentially providing greater services. A survey, conducted in fall 2022 by Public Advisory Group out of Ketchum, Idaho, showed 70% of respondents in the city and county favored the creation of the district (see "Surveys" tab for more information).

For most library districting efforts, generally there are two professionally developed and administered studies done to measure the community's feel toward establishing and funding a district. One study is often referred to as a fiscal analysis, while the other is generally known as the feasibility study. The fiscal analysis focuses on financial aspects and options involved in creating and sustaining an independent library district, while the feasibility study is a professionally conducted poll to determine the community's interest in supporting a library district.

So, you've heard something about a library district in Durango. Here's a few of the most common Q&A's:

What is a Library District?

How is the Durango Library presently operated and funded?

The library is owned and operated by the City of Durango and is primarily funded by revenue from the City/County Joint Sales Tax Fund.

Are there other library districts in Colorado?

What areas would a library district in Durango cover?

Bayfield and Ignacio are already served by their own library districts, so a library district here would likely be composed of the City of Durango and the remainder of La Plata County.

Tell me more about the library board.

A library board would be appointed by the City Council and County Commissioners. The board’s powers and duties are specified in the “Library Law,” Colorado Revised Statutes 24-90-109. The library board appropriates its funding and has full governing and decision-making authority for the library.

Since a library district is funded primarily through property taxes, how much of a tax increase would a local property owner likely see?

An increase in property tax is based on the mill rate. Two professionally conducted surveys will need to be done before a mill rate would be recommended. The first is a feasibility study of representative sample-sized group of Durango and impacted La Plata property owners to measure their disposition toward an increase. The second survey is a fiscal analysis of current and long-range financial requirements to establish a library district. We anticipate those studies would start in early 2022.

What impact would a library district have on the facility and staff?

Those issues would be identified and addressed in the Fiscal Analysis.

Voter sentiment on formation of district 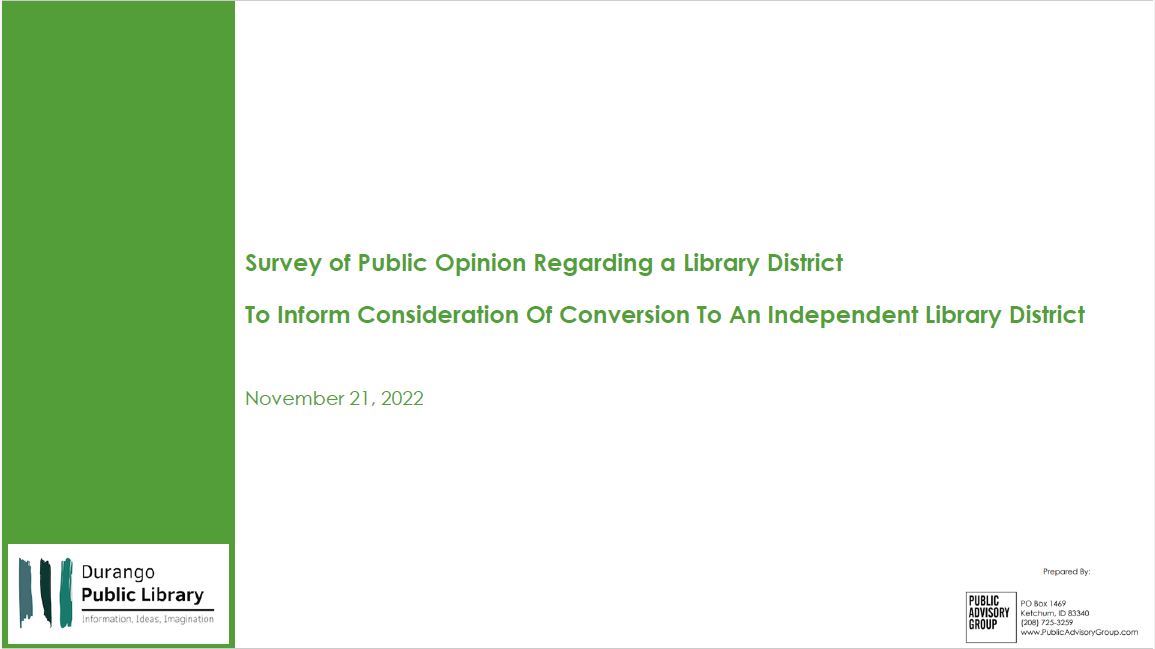 Attitude and use survey 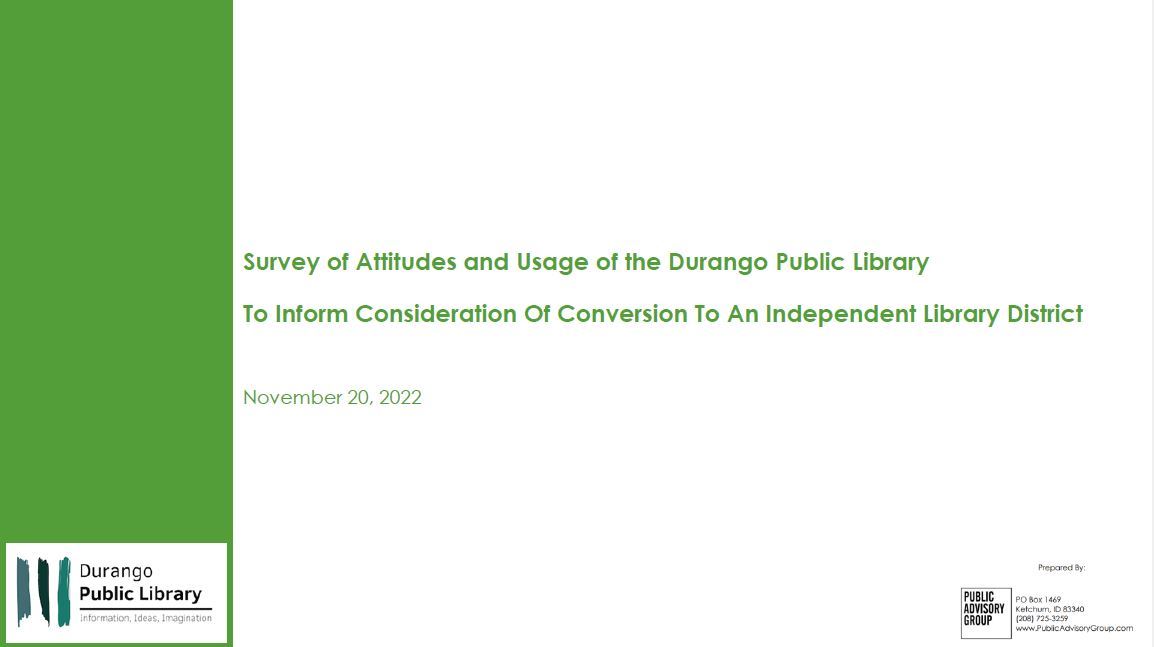