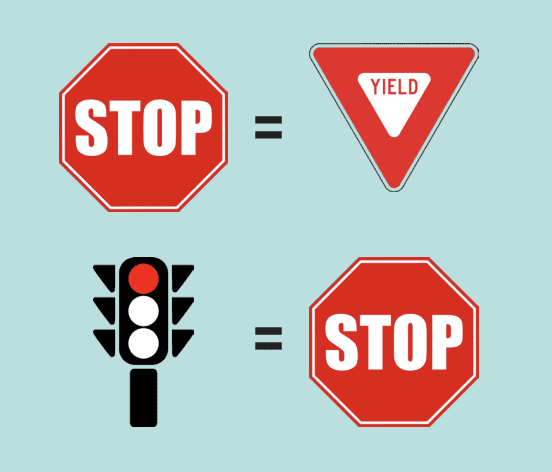 In April 2022, Governor Polis signed the Colorado Safety Stop into law.  The Safety Stop gives people on bikes and other “low speed conveyances” the legal option to ride slowly through stop signs without stopping first, as long as they are yielding right of way to pedestrians and other road users who have the right-of-way. Bicyclists and users of low-speed conveyances may also proceed at red lights after coming to a complete stop, if there is no oncoming traffic. Bicyclists and low-speed conveyance users can approach intersections at a reasonable speed and choose to apply the Safety Stop or continue to perform a traditional stop at both stop signs and red lights. Only bicyclists ages 15 and over may perform the Safety Stop. Younger riders may do so when they are with a parent or legal guardian. 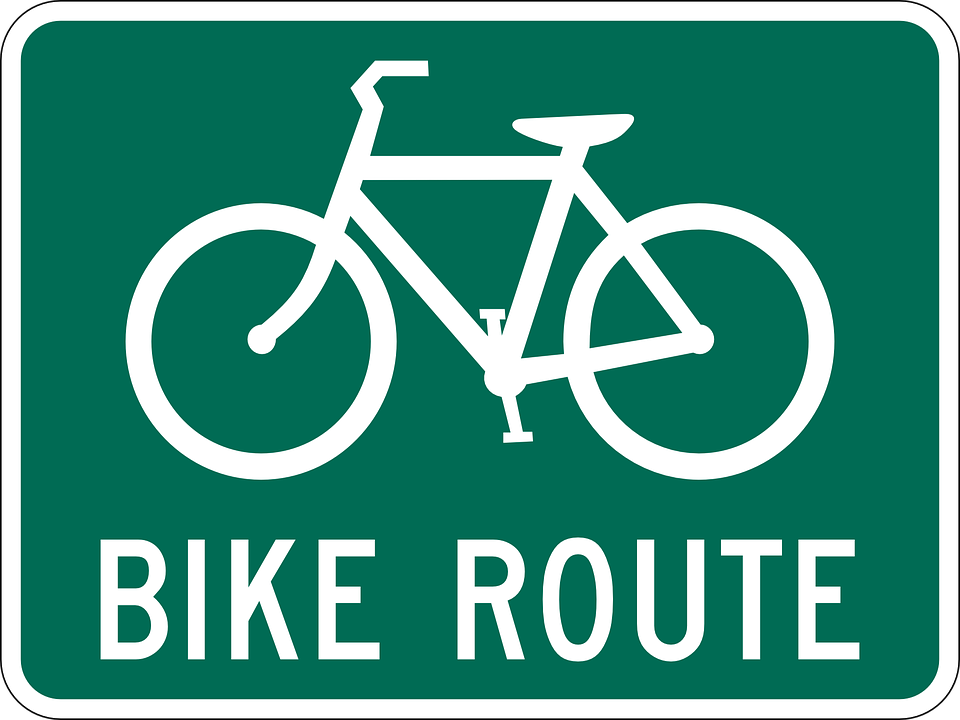 One of the most common reasons people do not commute by bike is the perceived danger and fear of riding in traffic. By following the suggestions below, you will minimize your risks and learn that it is not as hard or scary as it seems.

The Colorado Department of Transportation, in coordination with the City of Durango's Multimodal Division, has incorporated new safety features for cyclists as part of its US 160/US 550 Continuous Flow Intersection project (which includes many cycling, pedestrian and vehicle safety features through 9th Street).

Motorists are expected to yield right of way to bicyclists at these locations. The dashed colored bike lanes are placed at areas of potential conflict, such as the start of right-turn lanes, right turns at signalized intersections from a through lane, and where right turns cross a bike lane. Motorists and cyclists should travel with added caution through the dashed areas. 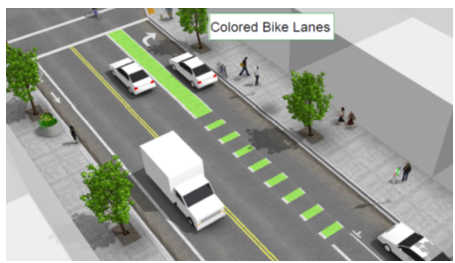 A bike box is a designated area at the head of a traffic lane at a signalized intersection that provides bicyclists with a safe and visible way to get ahead of queuing traffic during the red signal phase. Bicyclists will have better left-turn positioning at intersections during the red signal phase and within the box, bicyclists are grouped together so they can clear an intersection quickly, minimizing the impediment to motorized traffic. As shown, motorists are instructed to WAIT HERE in advance of the bike box. 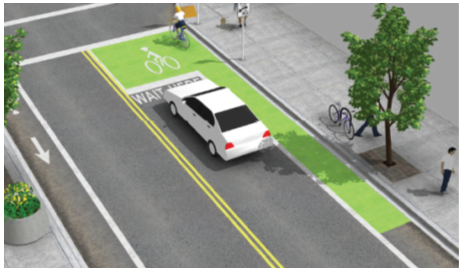 Two-stage turn queue boxes offer bicyclists a safe way make left turns at multi-lane signalized intersections from a right side bike lane. The two-stage boxes also improve safety by separating turning bicyclists from through bicyclists (note the box is positioned adjacent to the through bike lane). 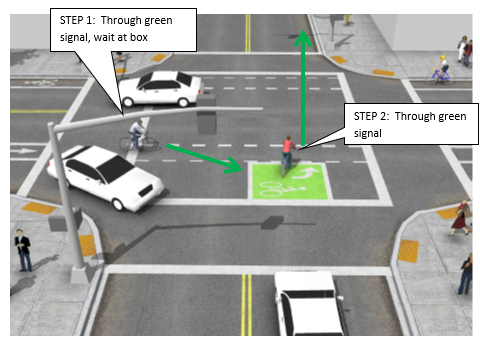 Both types of Bike Boxes have multi-radar cyclist detection that turns the signal green for cyclists regardless of waiting motorized traffic. The same traffic detector is also used to turn the light green for motorists waiting in their respective lanes.

Off-road riding is often done on a shared-use path. Shared-use paths are used by bicyclists of all ages, abilities, walkers, strollers, joggers, runners, rollerbladers and for organized events. Even though shared-use paths tend to feel safe, because they are off-road and wider, many incidents may occur due to the crowding and users travelling at different speeds. While riding on an off-road trail here are some basic rules to follow:

You love your bicycle and want to see it live a long, adventurous life! Regular maintenance is necessary to ensure that this happens. Maintenance isn't just one tune-up a year. You should inspect your bike every time you take it out for a ride. Listed below are a few quick checks to perform before heading out. (You can also refer to the League of American Bicyclists bike maintenance page.)

Inflate tires to the rate pressure listed on the sidewall of the tire. Use a pressure gauge to insure proper pressure. Look for any damage to the tire such as cuts, bulges, or tears. Remove small bits of glass, nails, etc. Replace the tire if it is damaged. 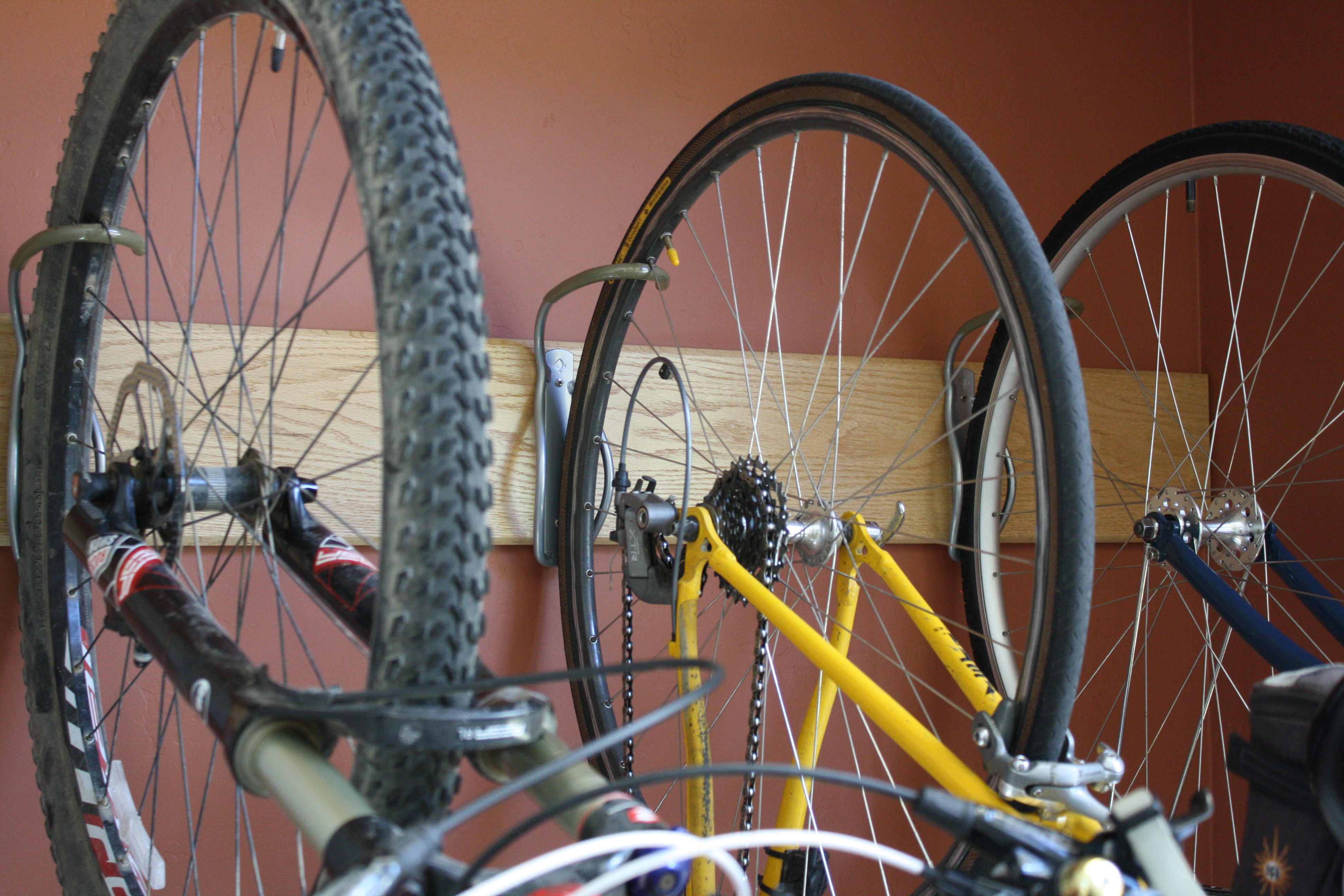 Your crank bolts should be tight. Check your chain for signs of wear. Grease your chain. With your bike upside down, take hold of your chain with a cloth. Then pedal and run the cloth lightly over the chain to remove dirt. Keep pedaling and apply a thin layer of chain grease. Excess grease will attract more dirt. If your chain skips on your cassette you might need an adjustment. 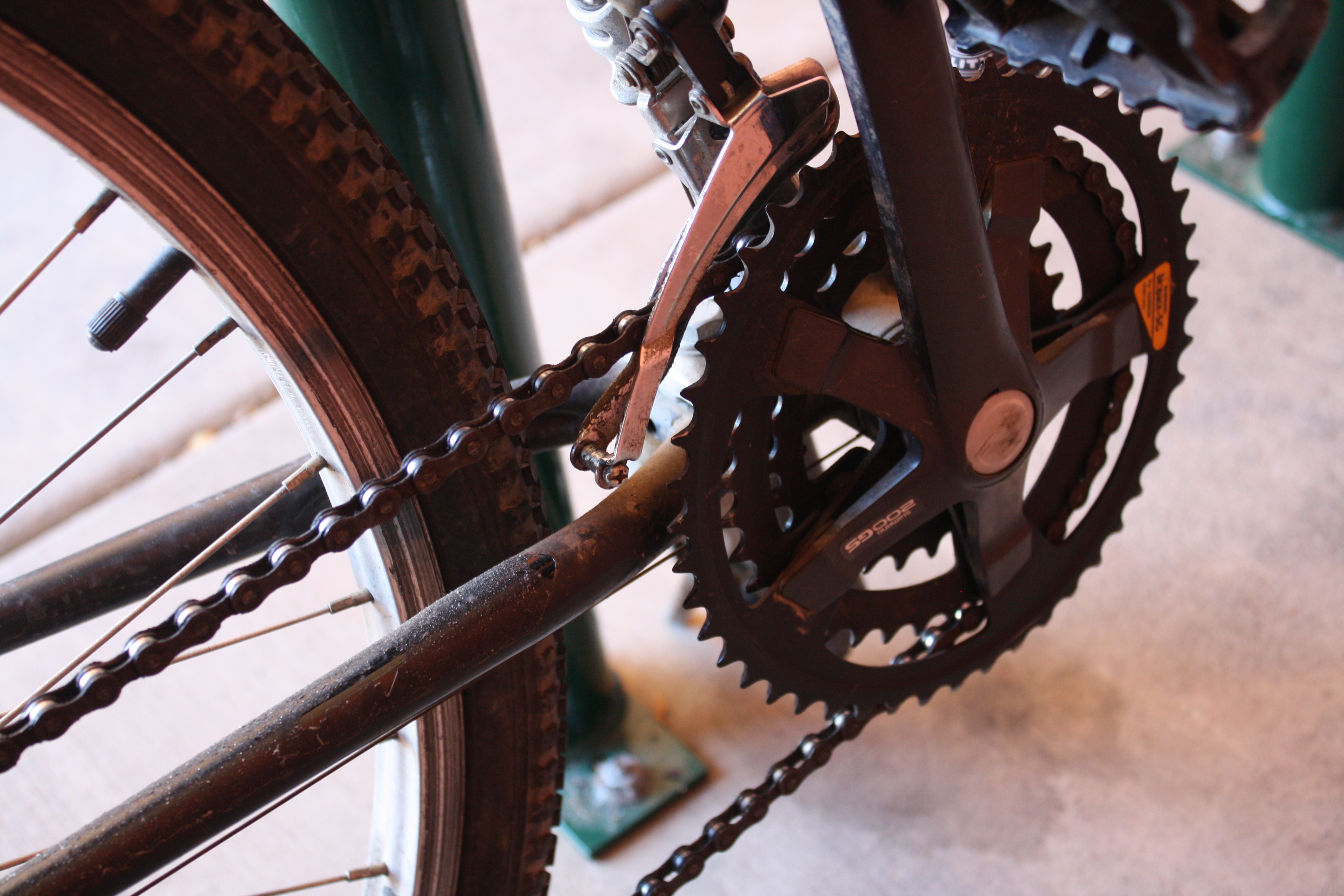 Take It Out For a Ride

Check to make sure the brakes and gears are working properly. If your bike won't stay in gear or can't shift to a low or high gear, get it checked out. Inspect your bike for any loose or broken parts, replace or fix them. You might even try picking your bike up and shaking it to see if anything sounds loose.

Note: If the bike vocabulary used here leaves you scratching your head, just visit one of the many qualified local bike shops here in Durango. They'll be happy to show you the ropes and get you rolling!

Benefits of Commuting by Bike 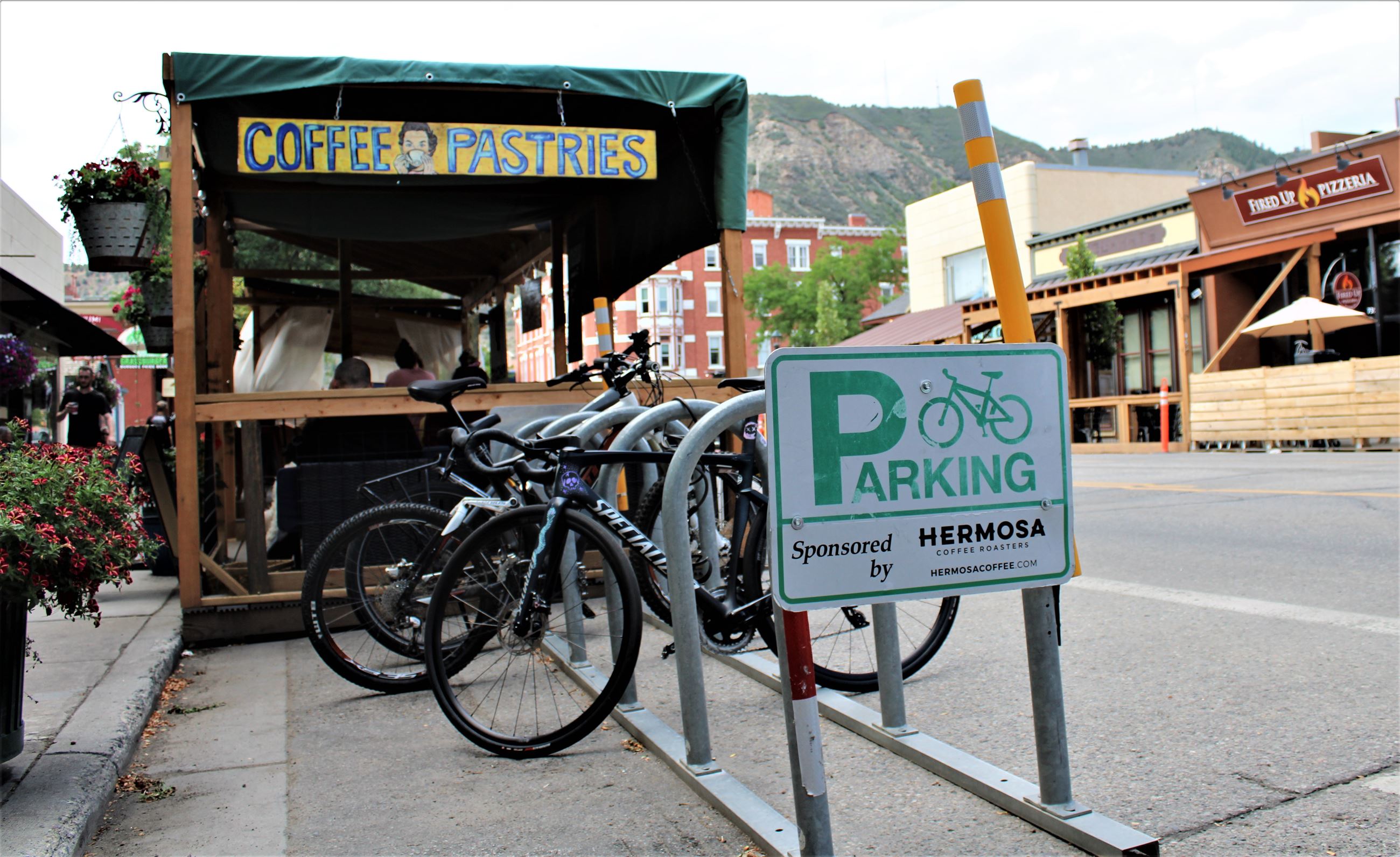 In an effort to improve pedestrian access in the Central Business District and in response to demand from local businesses along Main Avenue, the City of Durango deploys on-street bike parking corrals in the summer months. This program is coordinated with the bump-out program and locations are based on business requests and bump-outs.

Businesses and organizations interested in providing bike parking for their employees or customers, should reference the Association of Pedestrian and Bicycle Professionals' Essentials of Bike Parking for appropriate bicycle racks and best practices. Additionally, the Rotary Club of Durango Daybreak has a program to help businesses and organizations navigate bicycle parking and offer installations services. To learn more about Durango Daybreak's program, email RotaryRacks@bike-durango.org.